I’ve been a busy little beaver the past couple of weeks! Which is great, I love feeling productive, and being excited about what I’m working on, and doing in general. I mean, who doesn’t?

Actually did some freelance design stuff this week, and have some more coming up. (yay!) It had been a little while. Revamped some logo work that I had previously done for a client. I’m not posting them here though, the client loved them, but I don’t. That’s how it goes sometimes. But, what I’m getting at is…

I freelance! Hit me up.

Today we started a new mural at House of Flowers in Shawnee.  Super excited about this one! This year marks the shop’s 70th anniversary, and this mural is part of the celebration. There will be an event there October 12th to celebrate and we’re hoping tons of people will come out and see the mural and check out this rad flower shop!

This weekend we’ll be poppin’ up shop at Sunset Market’s event Norman Film Fest After Party. I went through a period of time where I was like, no more tabling at events! It sucks! But, now I’m actually in love with setting up our little pop-up shop.  It’s fun! We are cookin’ up a plan to make our van into a mobile gallery/pop-up, but in the meantime, our ez-up and tables are the tits.

Here’s some awesome news! Starting in October, we are going to be on the vendor roster at Dig It in the Plaza District in OKC! I’m about to be productive as fuck bringing you all kinds of cool little art pieces and goodies, including stuff that you’ll only be able to get at Dig It, can’t wait! 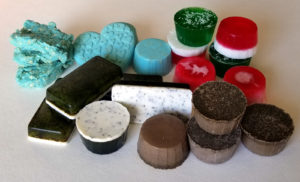 One of my goals for the upcoming year is to revamp, or at least reorganize this blog, and become more diligent about posting projects and keeping up with the site. I haven't been great at it so far, so I...

We always have our art and merch for sale at NoArt.Co and of course at our shows! All purchases help keep us in supplies and equipment, and are so much appreciated!

If you’d just like to support by donating, and help keep this blog going and getting better, feel free to tap that button, and you’ll still get something cool I made as a THANK YOU for your support! <3